Drawing on his 25+ years of experience as CEO of major corporations, Joel Manby wrote Love Works detailing how to integrate “love the verb” into the leadership ethos and philosophy of any organization. This servant leadership approach has been systematically proven to transform organizations through lower turnover, higher employee engagement, more satisfied customers, and stronger profits. Love Works has sold over 100,000 copies and has been re-released in an expanded and updated version.

Previously, he was the President, Chief Executive Officer, and director of SeaWorld Parks and Entertainment with well-known brands such as SeaWorld, Busch Gardens, and Discovery Cove. For over a decade, he served as the President and CEO of Herschend Enterprises, which managed internationally respected brands such as the Harlem Globetrotters and Dolly Parton’s Dollywood theme park and her chain of dinner theaters.
Prior to joining Herschend Enterprises, Joel spent 20 years in the auto industry and served as CEO of Saab Automobile during Saab’s U.S. turn around. Joel received an M.B.A. from Harvard Business School and a B.S. from Albion College.

Currently, Joel consults and speaks on Love Works and the leadership lessons drawn from his career. He is also the non-executive Chairman of Orange, a non-profit organization dedicated to the development and distribution of youth curriculum and leadership training to over 9,000 churches in 40+ countries. He has held that position for over 20 years.

Love Works provides the framework for successful leadership that results not only in deeply satisfying work life but also in a passionate and motivated workforce.
Love Works identifies the seven time-proven principles of agape love–love, the verb, that will:
- Cultivate a culture that builds improved employee engagement and long-term success
- Break down the natural walls within the workplace
- Overcome personal failures at work and at home
- Empower your managers and employees
- Disarm difficulties in the workplace
Discover the truth fo the power of love to change the course of your business and your life today! 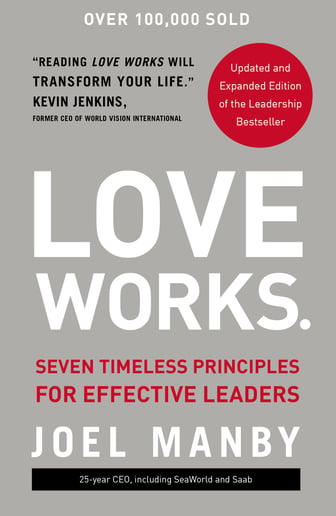